In our current home, all of Easter week is filled with events. My favorite event is the salt rug processionals that occur on Good Friday. All over the country, artists prepare colored salt (or sawdust) and begin their designs. The final results are breathtaking. 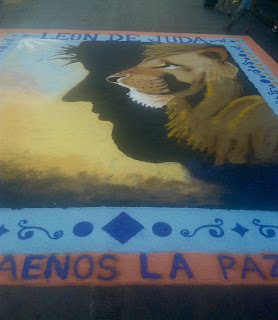 We are looking forward to this year's creations. In the meantime, we've been making our own. We're studying free-verse poetry. My son enjoyed "Fog," by Carl Sandburg."

We also drafted our own poems using a list. My youngest's list poem was about leprechauns. My son used the names of his friends, and my oldest did a list poem of possible date options for a werewolf:

Wallace Werewolf's Dating Options
Barbara Banshee: Screams at the tiniest thing.
Wanda Witch: Won't stop waving her wand.
Philipa Phantom: Thinks she can play the piano.
Ginerva Ghost: I can never give her a hug.
Violet Vampire: Very odd dinner dates.
Zinia Zombie: Loses her brain.
Franny Frankenstein: She might zap me.
Sally Sea Monster: Can't be out of water for more than 2 hours.
Who to choose? They're all perfect.

I try to join my children when they do their poems. This time, I did a memory poem:

Earliest memory: Maybe four years old, playing on Grandma's cream linoleum floor. Asking for a cookie. Grandma says, "Ask your mom." Knowing then, I'd get none.

First crush: Brown-eyed boy. Name scratched on wood paneling in the darkest corner of the closet.

Drunk goat: Tipsy on rotten apples. Can goats get drunk? Apparently--stumble, bleat--they can.


May you all have a lovely week and many memories to keep.

I forget how great little things are. Being around my children most of the day has reminded me. My youngest made a leprechaun trap last night. She strung tape across the opening and in the corners then put a green paper airplane in the middle for bait--leprechauns can't resist green you know.

Lo and behold, we found tiny footprints and a green ribbon left behind in the box, and some of the leprechauns gold-foiled Hershey Nuggets got stuck to the tape. Chocolate is as good as gold in my house.

The next morning, my youngest bounced around the house telling anyone who would listen about the leprechaun visit. She even wrote a thank you note (original spelling intact):

Dear Leprcon,
A great big thank you for the hershis.
I Love you soooo much!

We've been blessed with many visits from wee creatures lately, not the least of which is a dove family in our window. The mom and dad took turns sitting on the eggs and feeding the chicks once they hatched.

The chicks are now poking out of the nest and getting gangly. They're almost ready to fly. We've watched the parent birds feeding the chicks, but unfortunately, every time I tried to get a photo of that event, they stopped. But I did manage to capture one with both mom, dad and baby in sight--look close.

We got a box in the mail last week, our latest installment of Dianna Hutts Aston and illustrator Sylvia Long's gorgeous non-fiction nature books:


We're waiting for A Beetle is Shy, which won't be released until April 5. I've pre-ordered it and once we have that one, our collection will be complete. My kids will sit and read Dianna's books like time has stopped. I can't blame them.

We also had the grand pleasure of visiting the local British school and talking book talk with the librarian who wanted some book recommendations. The principal of the school is a friend and I told her about a British author I knew who lived in the States.

I'd critiqued his story several years ago then found it on the shelf in Target when we were back home for the holidays. I was thrilled to see it and sent him an email. Long story short, I let my principal friend know that a UK author was close by, and they're bringing him out for a school visit. And now I've got an in with their librarian. Librarians are good people to know.

I also found some luscious books by European authors at their book sale. We picked up one of Valerie Thomas' Winnie the Witch books. I'd never heard of them and fell in love with Korky Paul's illustrations and Winnie's whimsical personality.

I also picked up a German author's book, The 13 1/2 Lives of Captain Bluebear. I'm looking forward to starting it once I finish The Luck Uglies.

All in all, we've had a simply wonderful week. Have a great weekend.

I didn't think I could pull it off, but as I was scanning through some old poems I wrote for some reason, I realized I could probably polish one up and turn it into an entry for Vivian Kirkfield's 50 Precious Words Contest (see rules here).

We've been slammed this week with school, and as you can see from the photo above, I finally succeeded in making a real sourdough bread--from a sourdough starter that we cultured from the air. Yeah baby, pioneer style!

So I figured, if I can pull off a sourdough, I can surefire pull of a kid's story in 50 words or less and shoot, why not do it rhyme, especially since I already had some ... started (insert cheesy drum roll).

I guess I was still coming off my victorious sourdough glow--or maybe it was just the sourdough starter fumes--but I am not a poet and do not usually write in rhyme so I knew this would be as arduous a task as making bread. (But thank you Vivian for the courage to try!)

My first attempt came in at 71 words! Grrr. The next one came it at 20 and the one I tried after that came it at a whopping 37 words! Woohoo.

So here you have it:

I want a pet moose,
and a pink sparkly goose,
and a hippo the size of a peanut.

Then give me soft moss
for my bald albatross
and an owl who will roost in my tree hut.

And just because I'm feeling daring, I'll include my other two attempts (Not to be considered as my entry in Vivian's contest):

Greedy goblins grasping high,
Stealing sunshine from the sky,
Loud they thunder, stomp and moan,
Raining curses on my home.

And the one I really wanted to enter but couldn't get under 71 (grrrrr) words:

Echo in my Pocket

There’s an echo in my pocket
trying to reach my ear.
It scares me, I must say so
I put it there last year.

I stuck it in the jacket
I left out in the snow
And must have froze it solid,
But now the sun’s full glow.

Alas, it’s started melting
and dripping down my leg.
What’s that the poor thing's saying?
“Help! I’m stuck inside an
egg…
egg…
egg…”

I can't leave this post without sharing something fun from my children. This week it's my baby's turn--with her permission. We did synonym poems on Monday. I'd never heard of them, but I found them in a book I picked up from a library inventory sale. The idea is to form a couplet using synonyms. This was my littlest one's first attempt:

And with that, I will bounce back to tasks of the day. Have a great week and good luck to everyone in the contest.

Here's an invitation to a great friendship with your journal, writing notebook, idea book, project workbook, diary, family dinner table conversation, to do list, latest chapter, blog, or whatever else you think the invitation applies to. 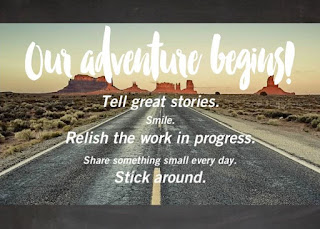 Middle Ages and Beyond

My oldest daughter has been doing a segment on the middle ages. Our nightly reading was a few chapters from Crispin: The Cross of Lead, by Avi.

The story's setting is well done. The authenticity of the book's medieval language, customs, and culture was brilliant. We learned a great deal about life for a medieval English serf. I learned some new terms too, like compline, the last of the seven canonical hours. Or mazer, a drinking bowl usually made from hardwood.

My daughter even knew what wattle and daub was before I had to look it up. As you can see in the picture above, the wattle is the frame of interwoven sticks. The daub is the mud or clay mixture slathered over the wattle--a common building technique in medieval England, and other parts of the world.

I'm hoping my children are learning as much as I am. Homeschooling isn't easy, but in all raw honesty, it has been more rewarding than I thought possible.

I was speaking to a retired teacher several months ago. She asked me how old my children were, and after I told her, she smiled and said, "Those are good ages--the children still have their own colors. When they start leaving primary school, they become gray."

Of course, this is paraphrased into English from my really bad understanding of Spanish, but the idea of gray children ping-ponged in my brain for months after, especially as I watched my daughter "fit in" yet again to a new school year.

Taking my kids out of school was a hard decision, but seeing the color come back into my daughter's personality has helped me feel at peace. In fact, I think we've all regained a little color.

I've certainly livened up my usual day with gusty renditions of The Ants Go Marching On and B-I-N-G-O  (complete with actions), not to mention our morning poetry recitations. Shel Silverstein is my children's current favorite.

Oh how I've missed his poetry. And for that matter, all the poetry I didn't know was happening all around me.

Thus far, the middle ages have been good. And perhaps if I'm lucky, my middle ages will be followed by a Renaissance of my own.

Have a great week.