You Gotta Belize It

We recently returned from a trip to Belize, a tiny Central American country on the Caribbean coast, and the only Latin American country with English as it's official language (the country is formerly known as British Honduras).

We've traveled to some pretty amazing places, but Belize ranks in the top three for me now. We stayed first on the mainland in the jungle regions near the border of Guatemala. Mayan sites sat all around us. A stones throw from where we stayed, archaeologists were excavating a recent find.

We could have immersed ourselves in Mayan sites without driving anywhere, but we'd already pre-booked a trip to the Actun Tunichil Muknal (ATM) caves a couple hours away. Had I known what I was getting myself and my children into (my youngest cleared the height cut-off by a few inches), I likely wouldn't have gone.

I guess it's good I didn't know then, because we had a blast and somehow managed to survive the heart-stopping coldness of the water, the slippery climbs and rickety ladder that took us to the main level where the "Crystal Maiden" (now thought to be a juvenile male) lies in repose. A potential sacrificial victim, the skeleton has been fittingly memorialized in calcite.

I recently wrote about The Well of Sacrifice, a middle grade novel about the Maya. We finished it and enjoyed it, and found it useful in preparing for our trip.

I caught myself telling the kids, "Okay, remember, Evening Star Macaw (the main character) didn't look down when she had to climb the Well of Sacrfice, so keep your eyes up and focus on putting your hands and feet in safe areas."

I guess I was feeling pretty bad about the "mommy fail" moment of having dragged my children into a treacherous cave, so I tried to redeem myself by turning it into teaching moment.

Seriously, however, the book really helped put things into perspective for my children. They knew about the ritual pottery we found in the cave, the human sacrifices, and the Mayan's perspectives on their gods. All of which helped the trip come alive for them. 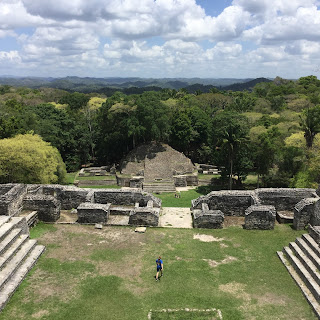 Having survived the whole caving episode, we all felt exhilarated and ready for our other adventures, which included horse-back riding in the jungle, snorkeling with nurse sharks, sea turtles and more fish than I knew existed, and an incredible trip to Caracal, a Mayan site with temple after temple and stele with relief still visible. 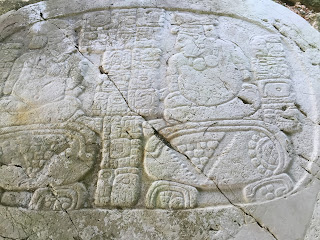 We had an "epic" time. The kids got treated to hands-on science, marine biology, social studies, history, ancient cultures and excellent Caribbean food.


I failed to bring home any souvenirs other than scratches, bug bites and sand in my shoes, but I sorta wished I'd sprung for one of the tacky t-shirts sporting the "You Gotta Belize It" slogan. I have a hard time Belizing some of the things we did myself, all well out of my comfort zone, but I don't regret (so far) a one of them.


I might have found a new slogan. Have a great week.

Email ThisBlogThis!Share to TwitterShare to FacebookShare to Pinterest
Labels: Belize, Johnell DeWitt, The Well of Sacrifice